Well today is International Women’s Day, do you know I hang my head in shame as it’s an event I haven’t really noticed before. I mean the earliest observance was in 1909 with official UN themes since 1996, just as I was leaving university.  In over 20 countries it’s an official holiday with some of those countries only giving that to women, it’s not a holiday here in the UK though.

I’m now 42 and I never saw being a woman an issue, I think that’s because of my family, but then I had bigger problems to break barriers with (literally) I was in my past severely overweight, something I now know was linked to a medical condition (a now known disability), but despite being extremely physically fit, my appearance was an issue from childhood and continued into adulthood along with the bullying it provoked.  Because of that I missed some of the moments and achievements of being a working woman I may have celebrated, or missed out on.  Looking back I know I was held back  in jobs and paid less than my male counterparts, but because of my size I was also paid less than some of my female peers.  Life changed for me in adulthood I had tackled the weight issue back in 2005, but from 2009 I started my journey into complicated ill health that has left me disabled, now medically retired (sadly without early access to my pension) and now I am seen as unable to be part of mainstream working, so getting over one hurdle (obesity) I was not faced with another (disability).

Life is funny when you look back on it (well its laugh or cry), there are people who go through school, train for one type of work, go into that field of work and remain there until they retire.  My life was very different.  I have said in previous articles that I trained as a Stage Manager and followed that career path for five years until injury made me have to have a re-think. However the job of stage manager carried many hats I was already multi-tasking roles but without realising it. So after the injury I sustained I had to make a change of career, which led me down a clinical path and into the NHS, where over 12 years I took on several career roles in that sector. Behind the scenes though I was always crafting, just back then it was for friends as a hobby.  So when I was medically retired in 2013, my brain was still working (mostly, though sometimes my dyslexia I swear likes tripping me up), however my body was letting me down, yet I needed to be doing something. So again I re-invented myself and became an Artist/Photographer/Crafter/Writer (if you include my musings here *grins*).  But you see this hadn’t been something new to me this re-inventing lark, not only had I seen this done, I had lived and grown up with the person that showed me it was possible in the most amazing way.

My Mother was a genius re-inventor; she didn’t have the best start in life, she was born into the generation where women worked (in her case from a young child) until motherhood and then would be working managing the home.  Before I was born, my Dad came home and announced he was starting his own building business, this changed our household forever. There were times that we, through Mum and Dad’s hard work, were very privileged and there were times in recession, where life was hard and worrying.  To become the working unit they were, my mum (in her spare time) sewed car carpets in the garage (I believe I slept in the pushchair by her side).  She went to night school to learn not only typing but book keeping too, all so that she could be the other roles in the business to my father.  I would remember occasions as a child waking up to hear board meetings going on between Mum & Dad at 3am in the kitchen.  When I turned a teenager we moved out to a small holding in the sticks where we kept 1000’s of chickens and worked with rare breeds, this of course was on top of the business.  We moved  to a 16th century cottage that Dad proceeded to rebuild; being grade II listed it meant being taken down to the ground leaving with just the beams standing, and then rebuilding it back up, original brick by original brick.  I remember winters with my Dad replacing the tiles on the roof that my mother was hauling up to him.  They were a true partnership and when my Mother passed away 13 years ago after a long illness a huge hole was left in our hearts and our worlds.  My Mother showed me and those around her that anything was possible and that you can be happy mucking out chickens, doing the books, answering the phone, cooking the tea and much, much more.  I have only told you a smidge of what she did, she didn’t get accolades for what she did, but if you put together everything she achieved maybe she should have.

So in part because of her and my Dad I felt brave enough to run my own company.  For those that don’t know, my logo of my little fairy was drawn 13 years ago when my mother passed, it was always around the house and when I started my business it seemed right to have my mother leading me and so my little fairy became my logo.  Now in my case it appears that since running Spratt’s Designs that I work alone, but those that know, know I am not an island. I do not do this by myself, yes I design, I order materials and I make, but in the background I have a little elf who does the shipping runs, helps me with craft fairs, storage set up, research and is the one who tends to me when I can’t function…. and yes is a ‘he’. I know it’s international women’s day but I’m being bold and saying that without him I cannot be Spratt’s Designs, I cannot be the Disabled Crafter.  Now in my case the person by my side is my Husband (the fact is his help is alongside his day job and completely without financial gain, so it feels so very special).  It didn’t have to be a he, I may have had a partner who was female or a person in my life who stepped up to do what he does who is female.  I am not saying that because he is male I wouldn’t be who I am, all I am saying that I could not be doing this alone, and even if I could I am grateful and lucky not to be doing it alone. In truth I spend enough of my day alone with the cat, many more hours without human company and I may in fact turn feral.

So I am celebrating re-inventing and turning my hobby to that of becoming a professional crafter.  OK  I cannot work full time, I don’t have the ability some days to physically work, but I work enough to sell to the public and I am proud of my makes, more so because of the feedback that I have received over them.  So I may not work 100’s of hours a week in some big corporation but I am a professional and I need to see myself as that.  It is so very easy to look at those high flyers or how I used to be employed and think I am not worthy of the title ‘Professional’.  Crafting makes me feel worthwhile, feel like I’m contributing not only to society but to my household.  Ok what I bring in after costs is no living wage and certainly nowhere close to what I was earning when I was at full capacity, but it’s something, and not everything I measure should be against money.

So along with my mother showing me how to be bold, my husband helping me to be bold, and every day hearing and seeing people whose boldness inspires me, I too am bold.  I may not have broken any glass ceilings in my life time, but I hope that I may have given a little fizz to somebodies inspiration, given them a little boldness. So today I am being bold for change, not just that women get treated equally (on any day not just international women’s day) but also being bold for change, change to re-inventing themselves, not giving up and realising that they do not have to stand alone. 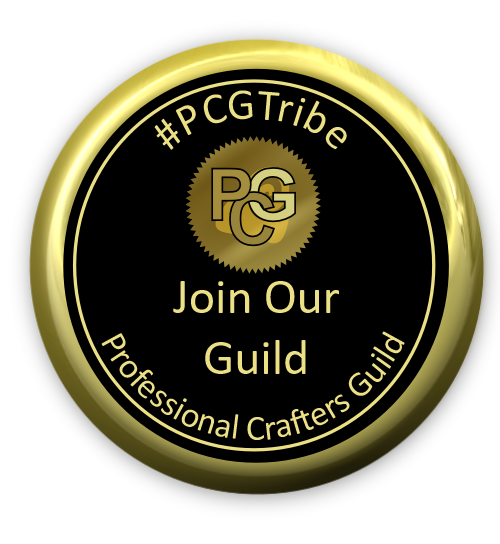 Shop with our Members

Listen to our Podcasts